The Unseen Role Our Muscles Play in Getting Older

Our muscles allow us to go about our days with ease, but we rarely think about how we're treating them-and we should, especially as we age.

Try making a list of every physical move you've made today. It probably starts with getting out of bed. But wait, did you stretch before you actually stood up? Did you raise your arm to press a button to call an elevator? Pick up a pen, sit up in your chair, walk to the bathroom? These all go on the list. Now add the physical things you did automatically: breathing, blinking, your heart pumping. How long is the list? More importantly: What do they all have in common?

Everything on that list is powered by the same thing.

And paying close attention to that one element throughout our lives can drastically change our quality of life as we age. What is it? It's muscle. Maintaining it is one of the most important things we can do, and doing so doesn't mean hours in the gym. It's much easier than most people realize.

There are over 600 muscles in our bodies. Most of their work goes unseen, so it's easy to take for granted their role in our overall health. Even the most vigilant amongst us often let exercise routines fall by the wayside as work and family life and other priorities eat up our time; we may feel less fit as we age but chalk it up to exactly that: the inevitability of age. And it feels okay-until it's not. After the age of 40, we can lose up to 8 percent of our muscle mass each decade. After the age of 70, that loss can nearly double, up to 15 percent a decade.

Looking back at your list, cross off all the things you wouldn't have been able to do if you were easily winded, if you had weak arms, if you couldn't stand up. This is what your day would look like if you were experiencing age-related loss of muscle mass and strength, known medically as sarcopenia.

Muscle loss can happen gradually, often going unnoticed until a major hiccup happens in our health-a hospitalization or sickness, for instance.

Depending on your level of inactivity, you might notice "you often can't do all of the things in your thirties and forties that you were doing in your twenties," says Abby Sauer, a registered dietitian at Abbott. "It takes more energy and physicality than it used to." It gets harder to rise from a chair or grip something tightly, things that might not seem like a big deal but are actually the first small signs of muscle loss. These weaknesses accumulate and get harder to correct with time, adds Sauer. In the United States, 43 percent of women and 53 percent of men over 80 years old are sarcopenic and have lost significant muscle tissue with age.

After the age of 40, you might be losing up to a quarter pound of muscle every year. Over a decade, that could shake out to 8 percent of total muscle mass.

At the age of 60, you might have already lost nearly 20 percent of total muscle mass.

After the age of 65, 1 in 4 Americans will sustain a fall-related injury each year. But you could lose up to 2.5 pounds of muscle by being bedridden for even 3 days.

After the age of 40, you might be losing up to a quarter pound of muscle every year. Over a decade, that could shake out to 8 percent of total muscle mass.

At the age of 60, you might have already lost nearly 20 percent of total muscle mass.

After the age of 65, 1 in 4 Americans will sustain a fall-related injury each year. But you could lose up to 2.5 pounds of muscle by being bedridden for even 3 days.

But losing the majority of muscle and strength as you age is not an inevitability. While we're bound to lose some muscle (and that loss starts earlier than we might expect), says Sauer, we can definitely minimize or slow the process. The first step is to take a hard look at our diets: If we choose the right foods, we can actually help our bodies maintain or rebuild muscle. The second is to develop exercise habits that prioritize the health of our muscles.

Most of us are aware that protein is a muscle-friendly favorite, and for good reason: It's broken down into amino acids, our bodies' main material for building new tissue. One study showed that eating protein-rich foods right after exercising increased the body's tissue-building rate by 50 percent. What we don't always realize is what happens when we don't get enough protein as we age. Not getting enough protein for our age and body size can actually cause our bodies to break down muscle-giving us plenty of motivation to fill our plates with poultry, eggs, beans, and other protein heavyweights.

Other ingredients can help the process, too: HMB, a metabolite from the amino acid leucine, further supports muscle health, and Vitamin D can up the density of that new muscle–but protein is by far the most important to our muscles. And as we age, it becomes harder for our bodies to break down protein. That means the amount of protein our bodies need changes with age. To combat muscle loss, older adults need nearly twice as much protein as younger adults. "When you're older, your body isn't able to utilize [protein] as well as it did when it was younger," Sauer explains. A protein-rich diet can help make up for that slowdown.

Nutrients that are important to muscles:

Zinc: helps the body produce testosterone, which can build muscle and aid recovery from exercise 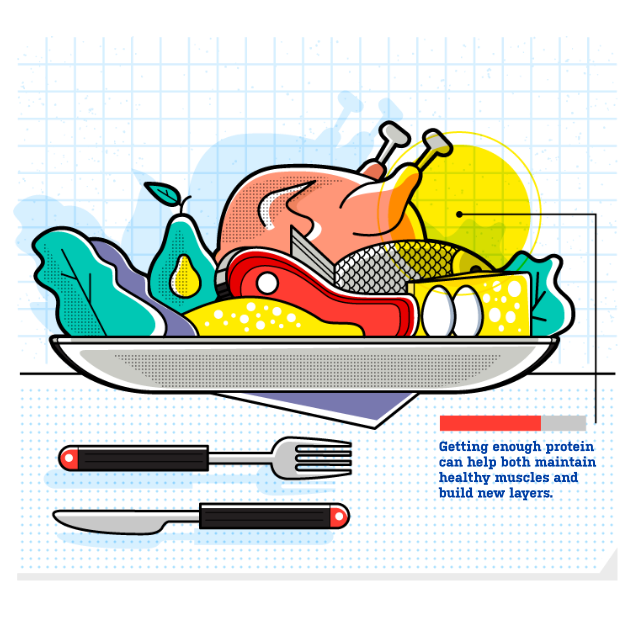 Along with the right diet, the physical elements of muscle maintenance can be woven into daily life. Think of the last time your muscles were sore. Had you lifted a heavy box? Walked a steep incline? These are forms of resistance training, which research is showing to be a massive muscle helper.

Sauer notes that taking these one step further is also beneficial: Lifting weights or using resistance bands, for instance, will keep the everyday things easy. And if the everyday things have started to become difficult, an exercise routine can reverse some of the damage: According to an analysis of 39 studies on exercise in late adulthood, weight training increased muscle mass by an average of 2.5 pounds in five months. That means that in less than half of a year of weight training, you might gain back more than seven years of lost muscle. With the right diet and exercise throughout your life, though, you'd likely never need to regain lost muscle, because you wouldn't have lost it in the first place.

The essential thing, Sauer says, is to make those moves early, and to keep paying close attention. "Making sure that you're in the best possible shape… means you can live a great life now, and have really good health down the road," she says. "You might not think you need it now, but you're going to need it at some point."